Today was our July pack meeting.   I knew we'd have relatively low numbers, so I let the boys decide which sports belt loop we'd work on.  The choices were Ultimate, Basketball, or Soccer, and Ultimate won in a split decision.  We had five Scouts there, and our Commissioner's daughter, so we decided to work on the Pin. 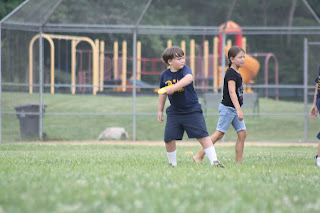 We started off talking about the rules and laying out the field.  Then we spent time practicing throwing and catching, including the specific catches and throws for the pin requirements.  During a water break we talked about the "flight dynamics" of the disc.  And then it was time for the game.  The kids had 3-on-3, and another leader and I stepped in to give a little height to help the smaller Scouts. 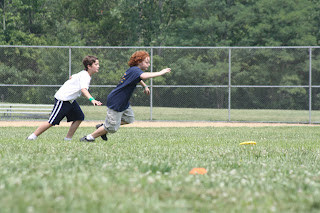 They had a great time!  They got along, and the only real complaints were more about the heat than the game.  At least that was a legitimate complaint!  It's 90 here today.  I was also happy to see them get to earn a pin (with just a little more work at home).  That's not something that's traditionally been a focus in our pack.  I'm hoping to see more of it! 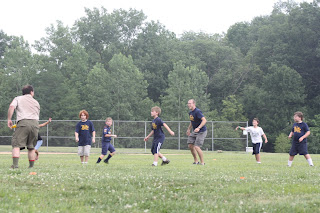